What is it about working with yarn that, for lack of a better description, feels so nice? Personally, I think part of the reason is the tactile aspect of the yarn. There’s something very calming about working with something with a pleasant or interesting texture, whether this be a soft merino or rougher cotton. I wondered whether there was any evidence that this has a positive effect.

A quick look at the literature turned up one small paper from Italy – a team working with older adults asked them to complete a series of activities that involved touching either a piece of velvet, a piece of canvas or a piece of Velcro1. The activities were short – two twenty-minute sessions per week for ten weeks. However, the people who worked with velvet showed a detectable reduction in negative emotions, as well as an increase in emotional competence. This was a small study, but does it suggest that touching soft things like velvet (or possibly yarn) could decrease negative emotions?

The emotional implications of touch were first examined in the very early days of psychological research, back when psychological phenomena were examined using the reports of “trained observers”. It is fascinating reading these old studies – their idea of how to study peoples’ perceptions was very different. A paper published in 18952 reports that trained observers with their eyes closed were handed pieces of fabric of various textures and asked to report the “affective tone” (positive or negative feeling) associated with each fabric type. Interestingly, all of the trained observers found the same fabrics to be pleasant: soft and smooth fabrics were found to be pleasant, while stiff, rough and coarse textures were found to be unpleasant. (A PDF of this paper can be found here, for those interested in very old research!)

This kind of question is still of interest to scientists today. We now have neuroscientific tools that can tell us how the brain itself responds to different kinds of touch. Because many of these tools (such as fMRI) require each participant to stay very still, most of these studies have focussed on the effect of being touched rather than touching fabrics or other materials. Most experiments in this area have involved peoples’ arms being stroked by fabrics or items (e.g., brushes) of different textures and degrees of softness3. This is particularly interesting because in some cases, it mimics social touch – being touched by another person (which we know has benefits for mental health and well-being). We are now able to precisely measure what kinds of touch people find to be pleasant, and which brain regions are activated in order to give this pleasant effect. We’ve come a long way from 1895!

However, I could find very little information on the effect of touching textured yarn or cloth on emotional response, let alone any information in a reduction in negative emotions. It would be very interesting to repeat some of the work from 160 years ago using the neuroscience techniques we now have available to see whether touching fabric or yarn has a measurable positive effect on the brain’s emotional centres. Perhaps someday, we will be able to suggest “touch therapy” to people as a way of improving their mood! 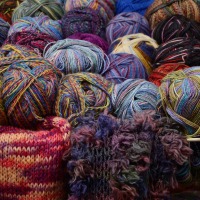